My Life Through the Chakras

The process of Svadyaya, or self-study, is never complete, not in a single lifetime. I may be teaching other Yoga teachers now (I am about to teach a Chakra Immersion Workshop), but I am still learning about myself. After teaching a six-hour chakras workshop last weekend for Yoga teachers in training, I am again inspired! Not only did the workshop come together in a lucid, structured, complete way, so did my own understanding deepen of the way my soul has been evolving. 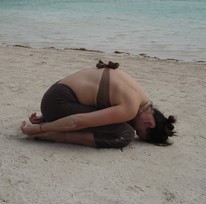 Chakra One - physical being. Governs our right to be here, our survival and the sense of support we get from the universe. I was born on a major holiday in Russia, May 9th, which is Victory Day that is celebrated by mass inebriation and fireworks. I was the first baby my mother had, and she struggled without help from the indifferent hospital staff. I was taken away immediately after birth, which was a custom at that time, to be "disinfected" and assessed. There were no lactation consultants patient enough to fuss with new mothers, and I was never breastfed. I received another woman's breast milk for a while, since formula was not available at that time in the Soviet Union. Soon after birth I ended up at the hospital again, this time with jaundice, and again abandoned to the indifferent hospital nurses. My mother eventually kidnapped me from the hospital (and nobody even noticed!). All of these traumatic events surrounding my birth - the society's grieving over the mass murder of the WW2, the separations from my mother, the compromised immune system of my early days (I would have extended hospital stays in the first few years of my life due to severe allergies) have left their imprint on my fist chakra - I was a sickly child.

It did not help that I inherited my father's constitution type - Vata. Anxiety and fear, insomnia, worrying about money and health are all signs of first chakra trouble. Even my obsession with shoes I think has something to do with it (or that's my story and I am sticking to it!). When I found Yoga in my early twenties, it was the salvation I was seeking. And sometimes when we have an injury and go to rehab for it, we come out stronger than ever. Maybe if I had it easier I wouldn't have felt the need to work so hard on this aspect of my life. But I didn't, and I did. It is still  my most vulnerable chakra, but it is also the most attended to with daily grounding rituals, with frequent reminders that the universe has been so generous to me, through the care I lavish on my home and garden - all of that has been wonderful in helping me heal. My allergies, which were life-threatening, have all but disappeared.

Chakra Two - emotional being. Our relationship to the pleasures in life, indulgencies and over-indulgencies, sensuality, sexuality, reproductive health. The right to feel what we feel, without shame and guilt. Tall order, right? Especially when one comes from a traditional society and family, where guilt-tripping is the primary tool of upbringing. One has to conceal true feelings. I think I am still a bit disassociated from my emotional nature, because I am even writing about myself in the third person. Intimacy and closeness are still hard for me, I like being alone, not much of a hugger. Every time I reach for another human being it is a bit of an effort emotionally for me to make myself vulnerable like that. Hence the perpetual quest to "open" my hips that led me to sacral-illiac instability. Now I have to be constantly on guard in my life and Yoga practice to keep peace in this area of my body/mind. Fluid transitions between poses that allow pleasure of movement and breath in my Yoga practice (in moderation - I must remind myself to pull back every now and then) has been very healing. 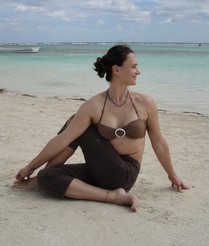 Chakra Three - the Self. Here things are better, probably because first and third chakras, governed by male energy as they are, are easier for me to relate to. I may be a woman, but somehow I find it easier to govern my "male chakras" (odd numbered chakras, as opposed to the female even-numbered ones). I vacillated between a low self-esteem as a teenager and an over-inflated ego as a young adult, but as I've matured I think I know where the golden middle is for me now. Confidence without arrogance, humility without self-depreciation. Judging less, accepting more. My strong core and Ujjayi breath have been instrumental in this process. I have learned to value myself and to stand up for myself, to say "no" when necessary, although it can still be hard sometimes. I have to tell myself frequently that I am good enough, for if I don't, then things fall apart that the center doesn't hold. 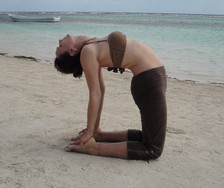 Chakra Four - relationships. It is still hard to say "no" to those who guilt-trip me. This is where chakra four and two are connected for me - to relate, I somehow must self-sacrifice. On the one hand my strong third chakra speaks up every time I am asked to go above and beyond, but on the other hand the guilty chakra two and the sad chakra four win. I have struggled with posture ever since my self-conscious teenage years, and even though Yoga has helped me get rid of my hump, I nonetheless still have it energetically - I feel it, and it's a burden. Giving and receiving love was always conditional when I was growing up - I had to deserve it, it was never offered without strings attached, always with a mention of all the sacrifice that was made for me, with the expectation to live up to some impossible standard. Yoga has offered me the self-nurture free of guilt that has been enormously healing. Gentle back bends daily keep my heart open and strong. I've come a long way, and the joy I take in my family and friends is a testament to how far I've come. 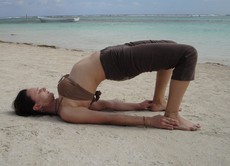 Chakra Five - communication. This is another strong chakra for me - once I knew who I was, I had to share myself with the world through writing, journaling, blogging, teaching Yoga. These activities come naturally and effortlessly for me, my voice is confident and reassuring, I regulate well the need to speak with the need to listen. It has taken time, but I feel that this is my healthiest chakra, considering. There have been some setbacks that have left their scars. Lies and half-truths, done to me and by me have been extremely damaging, no matter the intention. Chanting in my Yoga practice has helped a great deal in balancing energy there, and is probably the most cherished and enjoyable element of it.

Chakra Six - intuition. This has been a circuitous route for me. Chakra two and four should have taught me to trust my feelings and others, because by the time a soul reaches chakra six it needs to be able to trust the Self to be well-balanced. I had to learn to trust my instincts, and let me tell you, it is still hard. I am doing better now, and I trust my gut more than ever, but doubts still plague. My devotion to Yoga has helped me a lot in this respect. When my Yoga has matured to the point where I felt comfortable with unscripted home practice - that's when I finally felt connected to this chakra. I look inwards with my third eye and listen carefully to the inner flutterings of Prana and let it flow through me in the form of Asana, Pranayama, and meditation. I pay close attention to my dreams, which sometime astound me with their deep meaning. This self-awareness has been an enormous boon in my life. "Suffering that has not yet come can be avoided," say Yoga Sutras, and without this inner guidance it is near impossible to steer clear of that unnecessary suffering. 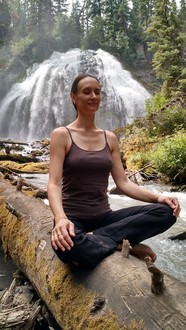 Chakra Seven - spirituality and intact belief system. Having grown up in an atheistic society of the Soviet Union, I am not a religious person. I generally buckle at authority anyway, and God telling me what to do, lest I be punished, never appealed to me. But I do the right thing not because I am afraid of punishment by God, but because it feels good to do so, because it is its own reward, and this is where spirituality and religiosity differ for me. It is possible to have one without the other. Ishvara Pranidhana (surrender to the Divine) was a murky concept for me for a long time. But in states of deep meditation I felt the kind of peace and belonging that is absolutely transformational. To balance this chakra we need to set aside space that is sacred, like the special Yoga room, or the mat. We need to set aside the time to do Yoga every day, and to pause the breath and the movement to appreciate the inner stillness our practice creates. "Yogas chitta vritti nirodaha" - Yoga is the cessation of fluctuations of the mind-stuff. Yoga has given me faith - faith in myself, my Yoga practice, in the benevolence of the Universe. I make sure that I never ask for too much or become too greedy for those gifts of the Universe, that I reciprocate whenever I can, that I express my gratitude on my Yoga mat in full prostration with a "Namaha" and by giving back the love and energy to my family, friends, and Yoga students. I know the well trodden path to the deep peace inside me.