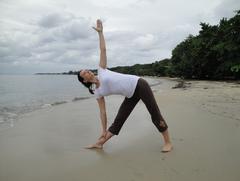 I think it is common knowledge now that the mind and the body share a powerful connection.  The ancient Yogis had known about this and used it to achieve high physical and mental states.

Asana in Sanskrit means "posture", and the way we carry ourselves, our posture, reveals volumes about our mental and emotional state.  Look around you next time you are in a store, standing in a check-out line, and ask yourself what the people around might be thinking or feeling just based on their posture.  Slouchy?  Or too erect?  Standing on one leg?  Arms crossed?  Etc.  And then analyze your own posture - what is the message that you are sending out into the world.  Since we store unprocessed emotions in our body, emotions we are too afraid to face, our posture often becomes a means of avoiding the areas of "storage" so that we could go on pretending everything is okay.

There is a lot of negativity out there, and what this world needs is not more it, but less.  So, be the change you want to see, and start with yourself - it is all in the attitude.  If your mental state is positive, then your posture will be exuding that positivity, friendly openness and confidence.  Sometimes, however, the mind is too bogged down, and it is too difficult to just will yourself out of the rut.  Then, start with the physical body by exercising, eating healthy, getting enough sleep.  Your mind will shift into a more positive place if your body is well taken care of.  If you are too depressed to move, see a therapist to help you clear the mind first.  Just start somewhere, and the rest will fall into place.

It is this connection between mind and body that informs Hatha Yoga as we know it today.  In the ancient times when Yoga first appeared (before organized religion and before any written record of it even existed), spirituality was awakening in human beings as a powerful force in our struggle to align ourselves with Nature.  God was out there, somewhere, fleshless, senseless, omnipresent and yet absent from the human struggles, inspiring us to be better, often by rejecting the physical body and by becoming ascetics and renouncing the world getting closer to God.  This view has evolved concurrently with major world religions at a time when the physical body was shunned, was considered sinful, dirty, a burden.

Take the Yoga Sutras of Patanjali, for example, which is still studied by Yogis and is considered the first written exposition on Yoga.  It is all about the mind.  The body is given no consideration, aside from a brief mention that one should practice Asana, but that probably just meant sitting down in good form to meditate.  The dis-eases of the body were known to be obstacles on the path of enlightenment, however other than meditation, nothing else was suggested as a means for overcoming the physical obstacles.  After all, the Yamas and Niyamas, or code of conduct for the Yogi, came before the Asana, before meditation, before anything else.  It is almost as if one had to be perfect first, before anything else could be achieved.  One must admit, it is very difficult to achieve peace and happiness just by meditating on it.  Only select few have the talent for such approach.

And then a few thousand years later, after eons of trying and failing, the human race had to come to grips with the difficulty of such approach.  Hatha Yoga as it evolved later, and largely as we know it today, was almost a backlash to this strict and mental approach.  What about the body?  Isn't it part of us, too?  Isn't it here for a reason, an integral part of human experience?  By embracing the body we are able to experience the divine within, it is here, in our hearts and minds, in this body, too.  We are made in the divine image and likeness, after all.  The Asana practice as we know it today was developed to tap into this connection between the body and the mind as an easier mechanism for shaping both.  It is easier to begin with the physical, to address the dis-ease first, and the Yamas and Niyamas (the rules and regulations, so to speak, of our moral code) were thought to almost be unnecessary, because if the body is fit, healthy, and at ease, so would the mind be, and it would be natural to behave like a decent, moral human being.

I like this quote from "The Yoga Tradition" by Georg Feuerstein: "He [the yogin] realizes in the pulsing beat of his heart the rhythm which throbs through, and is the sign of, the universal life.  To neglect or to deny the needs of the body, to think of it as something not divine, is to neglect and deny the greater life of which it is a part, and to falsify the great doctrine of the unity of all and of the ultimate identity of Matter and Spirit... Even the lowliest physical needs take on a cosmic significance." (p. 399)  I must confess, that the above is the exact description of my own experience of Yoga!

The kriyas (cleansing practices), bandhas, mudras and Asanas are all designed to purify the body so that Prana (life force) can be directed not to the matters of surviving the rigors of our physical existence, but to spiritual awakening.  Just as certain thoughts and emotions can be toxic to the body, so certain wastes and toxins or chemical/hormonal imbalances can produce an unbalanced state of mind.  Hatha Yoga has come up with a dizzying array of methods for physical purification.  And that's when is has caught on, because finally it was something for the masses, not for the select few.  It was doable!  Hatha Yoga has spread across the globe, and here in the West is has found a fertile ground - were were ripe for this obsession with the body, and it has appealed to our culture on a deep level.  This is the downfall of the Hatha Yogi, in some sense - through the constant striving to perfect physical body and practice, the Yogi gets trapped in the ego.

"By the path of yogic postures, you may rise from the lower levels of sense restraint and climb upwards by the steep ascent of pranayama.  Then you can reach the cliff of pratyahara (withdrawal of the senses), which is slippery even for the feet of reason, and from which hatha yogis, in spite of their boasting, are hurled down." (Jnaneshwari VI.3 55-56)

It seems that the pendulum keeps on swinging.  The Hatha Yogis, in my view, took this approach to extreme as well, and in this day and age (especially in the West) have almost forgotten why they are so committed to the body.  This is not to say that there are no Yoga practitioners who are still in it for spiritual reasons (far from it, on that later), but on a mass consumption scale Yoga is marketed as a "fit, thin, and beautiful body," maybe partly because it is the hook that gets people to practice.  However, I have to admit that I marvel at the high percentage of people who, having entered into practice for the body, stick with it for the mind.  Because it does work!  The ancient Yogis were right on some level, that if you give a person a healthy, radiant body, their mind and spirit would follow suit, whether that was their initial goal or not.  It is this powerful connection between the body and the mind that makes this possible, so as Yoga practitioner and now a Yoga teacher, I am still committed to my Asana practice as a means of achieving my goal of spiritual awakening and transformation.  That is why I am out there teaching Yoga - I am a fisherman, throwing a line out into the river, hoping to hook yet one more...  Making the world a better place one student at a time.