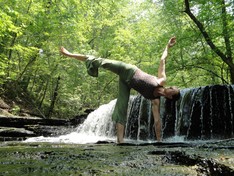 The Sanskrit word Yoga means union.  But union of what with what?  On the one hand, it means the union of the body with the spirit.  What does that mean?  To me, it means spiritualization of the body by removing the separation between the body and spirit, and recognizing, through experience, that the body is an embodiment of the spirit, and vice versa in the sense that "as above, so below."

The mind creates this separation through its ability to analyze and to create patterns and thoughts. Once the mind is stilled through breathing and we move into the shapes of Yoga, we can once again feel whole.  The awareness can illuminate and animate the body at will.

In a more poetic and allegorical sense, Yoga is the union of Siva and Shakti. Shiva is the Creator, and Shakti is the Creation.  The spirit is the creator, and matter is the creation!  Even though the mind has created a separation between the two, but they long to be one again.  Shakti is always seeking deeper and deeper (or some would say, higher and higher) union with her beloved Shiva.  Shakti is the playful embodiment of Shiva, His many ever-changing forms, but who Himself is formless, transcendent, and changeless.

In sense, then, Yoga is the union of the doer with the doing.  Of the Seer with the Seen.  And once that union takes place, even if it is just for a moment, the practitioner experiences profound clarity in the body and mind.

In Asana, one can certainly attain proficiency with diligent practice.  But being able to assume certain shapes is not Yoga, not yet.  Yoga is not the action, not the pose - it is rather a state of being one with the pose, a mental stillness inside the ever-changing container.  When the body assumes the different shapes of Asana, no matter how perfect, it can be compared to a picture in black and white.  It can be executed flawlessly, but it is still in black and white.  The beauty of black and white cannot be underestimated, it is an enormous achievement and something amazing does happen when you find yourself plugged into the Shakti.  However, without the Spirit to color it, to infuse it with light, it will not achieve its full potential.  Add breath, concentration, and control of the mind, and the shape of the body begins to glow and vibrate with a whole new awareness that now spreads to every cell of the body, spiritualizing it on practically cellular, atomic level.  It is truly a beautiful thing.

I am reminded of that today on my mat - how after a stressful week my body felt numb in places and stressed in others, how it even resisted the probes of my awareness in the beginning, as if the sheer effort of that was too much, but how through patient coaxing I was able to reclaim it. How joyful it feels now! I just love Yoga.