Yoga Skills: Playing with the Edge

I have been talking in the previous posts about several skills that we can hone in our Yoga practice, such as body awareness, breath/movement coordination, and selective engagement/relaxation, left/right side coordination and mirroring. The skill of "playing with the edge" is one that allows our nervous system to gradually be trained to accept greater range of movement, increasing our tolerance for stretch over time. Recently science has made great progress in understanding the role of the nervous system in people who are "flexible" and those who are "tight".

Apparently, it is not so much that the flexible person's muscles are longer or stretchier, but rather their nervous system has a greater tolerance for muscle elongation. It simply allows them to go into positions that to the tight person seem impossible. And it is impossible for the tight person to go there, because their nervous system would not let them - it would put the brakes when the person reaches the edge of what is perceived as safe by the body. Any further and pain would signal that no, it is a no-go, we don't do that, remember? We don't go there! 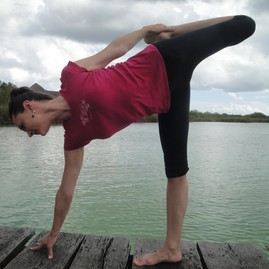 That edge is defined differently from person to person. This is why a complete beginner to Yoga can come to class and easily sit into a split (I've seen that happen so many times!), while another person may spend twenty years on the mat, diligently stretching, and be nowhere near (like me). Our nervous system is largely a legacy of our DNA. Some people are simply born flexible, while other people are born... not so much. Or not much at all. There is, of course, every place in between.

The thing is that our nervous system also possesses amazing resilience and can be taught many things, accidentally or on purpose, including how much pain to produce during certain experiences of the body. This is the reason why people with similar degree of damage would report vastly different degree of pain. A study of body awareness and chronic pain, for example, revealed that some people with very mild arthritis would report extreme discomfort, while others whose deterioration was literally bone on bone would report only mild discomfort. It seems that people whose skills of body awareness, right/left side coordination, and good mirroring (ability to precisely re-create a movement in your own body that you see someone else do) experience less pain, while people with chronic pain have what is called sensorimotor incongruence - or a distorted image of their body, poor proprioceptive capacity, and have difficulty coordinating their right/left sides. Interesting, right?

This is a two-way street - if you have little body awareness, you are more likely to experience chronic pain, and the less awareness, the more pain. Similarly, the more body awareness you have the less likely you are to suffer, and if/when you do, the milder the discomfort is likely to be. I believe it is the single most important reason why Yoga has been shown to have such remarkable effect on low back pain, for example. Any exercise helps reduce low back pain, but Yoga particularly - due to its specific focus on fostering body awareness.

Sensing the edge is one of the skills of body awareness - the ability to tell when the nervous system begins to react to an experience, to discern the degree of reaction/alarm that the nervous system is producing, and being able to negotiate, inch by inch, in a calm, peaceful, patient manner, that extra distance you want to travel. When we attempt a movement, reaching limbs, twisting torso, contracting some muscles while elongating others, being able to distinguish between the innumerable sensations that arise the ones that signal danger, or a healthy exploration of a new territory, knowing the difference and responding accordingly will gradually expand your playing field, and you will be allowed to move further and further out into shapes.

Playing with the edge is a long game, one that takes a lifetime of patient, compassionate, and diligent effort. If you stop for a period of time your regular stretching routine, you will find yourself experiencing a set-back. Your nervous system quickly forgets the frontiers of movement and takes a long time to conquer them. Over the years I've experienced the yo-yo of this process every time I take a break for a week on vacation, when I don't stretch as much and as daily as I usually do. It is always a surprise at how painful it feels to go where just a week or two ago I went with absolute ease, hardly experiencing any resistance at all. Whatever flexibility my body has is hard-won and takes daily attending to maintain, for I was born a stiff body.

It is important to recognize, through self-inquiry and self-observation, where in that spectrum you fall, and to accept what mother nature has given you. Work with it, rather than against it, and you will be rewarded. If you start to pursue feats of flexibility that are unnatural for your body type, you will increase the risk of injury. I have a painful story of my own in that regard.

Born in the Soviet Union, as any little girl I admired the Russian ballerinas and took ballet classes when I was very young. Every Russian girl is "indoctrinated" into ballet, but Soviet ballet is not interested in your personal development and growth, it is only interested in the glory of the motherland. At some point the Moscow Ballet School decides whether you have what it takes to become a prima ballerina, and if you don't - tough luck. The selection process is very strict. Not only I was found unsuitable because of my above-average height ("We would never find a partner for you"), but when they asked me to do the splits, even though I was able to come close, after a bit of poking and prodding I was declared as a hopeless case. "She will never be able to spread her legs!" was the verdict, and so at 8 years old I was out. According to the Soviets, if I was never going to be a prima, then why bother with me at all?

Looking back on it I think I was saved years of torment at the hands of brutal Soviet ballet machine, cranking out super-flexible waifs. I hit the genetic lottery with that one, for sure. However, I was too young to appreciate the narrow escape, and the experience left me with a deep insecurity.

When I discovered Yoga and then especially during Yoga teacher training, everyone seemed to be more flexible than I was and the old insecurity that I'd almost forgotten about was back. I was going to prove them wrong - I could do the splits if I tried! It was the beginning of my undoing. I remember deciding to devote a year to achieve the shape of Hanumanasana. At the end of that year I had pain in my sacrum because over-stretched ligaments destabilized my sacro-illiac joint. Five years later I am still struggling with the fall-out. The damage was permanent (once you over-stretch the ligaments, they never go back to their original length), and I am still unable to do the pose.

So, let this be a warning to those of you who think you can win over mother nature. No, you can negotiate with it, but there will be a limit to what you can get, and in my ignorance I did not know that the negotiation was finished a while ago, and I kept pushing. My advice? Delight and rejoice in every inch, but at some point you will arrive to normal range of movement, beyond which you are treading on dangerous ground. And Hanumanasana is not normal - it is extreme flexibility that no one needs to have to be a good Yoga practitioner or teacher. I had to be slapped on the butt to realize that.

So, the rules of the game of Playing with the Edge are:

What is a meaningful sensation? Enough for you to be aware of the stretch, but not so much that your face begins to tense, your jaw tightens, or there is pain of any kind, or anxiety in the mind. You feel it, that is all. You feel it for a little while, and then you back off. In a nutshell, you are letting your nervous system know that you are not going to hurt the body and force your will upon it. You are willing to listen to those sensations and respect the line your nervous system draws for you. Only then it will feel safe in letting you go a bit further. Be prepared for slow progress if you are more of a stiff person, and for rapid progress if you are the flexible kind.

When you are pursuing an ability to do something, ask yourself what do you actually need it for - to show off, to feel as if you belong to the special caste, to satisfy your ego, to prove something? Because that is not Yoga. Just because you can, doesn't mean you should. Yoga is not the achievement of the body, but rather it is the achievement of the mind - to see clearly what is, without being muddled by our samskaras, or habits and preconceived notions, or by expectations about what "should" be. Rather, Yoga is a steadiness of the mind, achieved to some degree by the steadiness of the body - as above, so below.

And the most important rule?

Granted, it can be very hard to know when that is, and often only in hindsight we are able to tell. Nonetheless, this is what being a teacher means to me - to guide people down the path that I myself have traveled, and to point out some of the places where I've tripped. Maybe it will help a few of you.