I never mind doing Yoga in public.  In a park, at the beach, at the train station or airport.  I have done it everywhere.  Sometimes it is just a few deep breaths.  Sometimes it is a full-on practice.  When I am traveling or on vacation and there is no access to a Yoga studio or privacy, I will do whatever it takes to practice, because my body and mind demand to stay connected.

Strangely enough, it is in these public places, with the bustle, noise, and many people around me that I have had some of the most profound moments of being in the state of Yoga.  Here is an example from my recent trip to the beach with family.  We were at the beach in the morning, and I set up my beach towel with the view of the waves and several families around me.  One family very close by was a Ukranian group, consisting of a mother and grandmother, with three small children.  I am Russian myself, and I could understand what they were saying.  The energy of the entire group was extremely negative from the beginning.  The siblings were quarreling amongst themselves, someone hit someone, the mother was yelling and chastising them, complaining to the grandma of the terrible things the children were doing to each other.

I proceeded with my practice, this time simply a spontaneous outflow of Asana, the inner intuitive intelligence of which always surprises and amazes me.  I slipped into the familiar witness mode.  This time, instead of just myself to watch, I had these other people making themselves very watchable.  I noticed my mind reacting to the commotion nearby, passing judgment and making the usual comments.  With a practiced inner gesture, I noticed and distanced myself from these reactions.  I even became glad that they were there, challenging me this way to stay focused on my practice.  Slowly, breath by breath, movement after movement, the surroundings began to fade.  My senses were turning inward in a familiar way.

Sometime later, after my practice had taken me into some amazing experiences of Urdva Dhanurasana, I was sitting in Sukhasana, the easy pose, chanting an inner mantra: Om Namah Shivaya on the inhale, Shiva Om Namah on the exhale.  I could feel  my energy coalesce toward the center, becoming brighter and more dense.  The angry voices were still audible, but as if through a fog.  I was making small, incremental adjustments to my posture, evening out the reach of my spinal column and then, suddenly, I felt a rush of energy through my body, as if I finally plugged into some electric circuit.  It felt literally as if electricity was surging through me.  I have had only a few of these experiences before, usually during Yoga workshops or retreats, after hours, if not days, of meditating and doing Yoga in serene, friendly, love-filled environments.  Prana!  I could feel it coming into Shushumna, my center channel, and moving upwards.  It was so powerful that it broke my meditation, I gasped and maybe even exclaimed something incoherent, and "came to" with a start.

Everything was quiet.  My own family was enjoying the beach, the Ukranians nearby also settled into some sort of truce, and I was left with the glow of this experience for several days.  The "aftertaste" lingers still as I write this almost a week later.  The experience lasted maybe a second or two, but it affected me deeply, giving me a glimpse of the boundless joy inside.

I believe it was because of the special effort it took to go deeper into my practice, because of the distractions, because of all the noise around me that I was able to go to that special place in such a short period of time - I was practicing for maybe half an hour at most.  I also realize that thanks to the years of my devoted practice that I was able to have the skills to do this.  I have long-established grooves now, that make traveling to the depths inside me easier and faster.  I have two small children myself, and they are often noisy, they love to play next to me as I practice Yoga, and I have learned over the years to stay focused and not be bothered by them. They could even be talking to me, and I would be answering back, the dog would be barking madly, and I would continue without losing concentration, still in this world, but no longer of it.

So this goes out to all those people who wait for the perfect opportunity to do Yoga, for a moment of peace and quiet, for that private space, for that special time.  If you place constraints like that on your practice, the "perfect" opportunity may never present itself.  If you can practice Yoga only in the controlled environment of a Yoga studio, under the guidance of a teacher, then you are limiting your experiences.  Do Yoga NOW!  Because Yoga is only NOW, always NOW, and you only need to DO it. 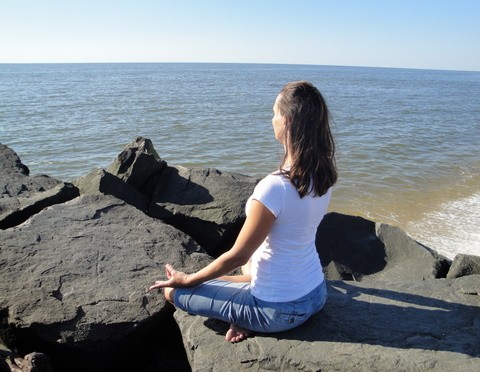