I often hear from my Yoga students that they are reluctant to practice at home by themselves because they are afraid they'd do something wrong or in poor alignment. With this blog I aim to dispel some of the mysteries of alignment and to help those of you, who are willing, to relax with Yoga at home. 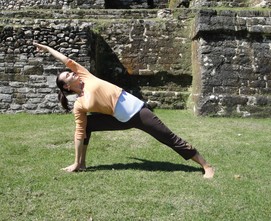 First and foremost, what is alignment? When we place our limbs just so, arranging our body into shapes, we want to get the most benefit from the pose, yet minimize the risks, while at the same time achieving specific function, such as opening the chest, strengthening the hips, introducing more space into the spinal column. There is also the issue of energy flow, or the way the pose makes you feel - calm, energized, light, centered.

Some Yoga traditions, especially Iyengar style Yoga, place alignment as the top priority, claiming that without "proper" alignment the pose would not deliver the full spectrum of benefits. Notice my the quotation marks, and you'd know where I am leading with this: since every human being is unique, there is no universal alignment that would be achievable and beneficial in equal measure for everyone. For some people whose body may not be physically able to assume certain poses just so, forcing or artificially propping them up in a pose would be a distraction in the best case and may even cause harm or injury in the worst case scenario.

In order to stay safe, we should pay attention to the way we arrange our bones, but there are actually not that many rules to keep in mind. It's like learning to play an instrument - there are just seven notes, and first you learn to make a harmonious sound one note at a time. Then you play two or more notes together, and eventually you are able to play Fur Elise. But there are still just the seven notes! I counted eight in our case, but you get the idea.

When joints are not weight bearing (say, you are on your back and your legs are up in the air), alignment doesn't matter so much, and it may be actually a good idea to move the joints and limbs every each way to mobilize them through a variety of angles and positions. It is best to begin a practice with simple, non-weight bearing movements to prepare your body. My next blog posts continue from here with some specific alignment instructions of the neck, shoulders, and pelvis, as well as recommendations on sequencing and content. Stay tuned!