Kundalini is a concept we often encounter in Yoga philosophy and literature, and it is often a murky concept with contradictory and confusing information.  Kundalini is most often described as a snake, coiled at the root of the spine and blocking the energy from entering the central channel or Nadi, of the body, called the Shushmna. 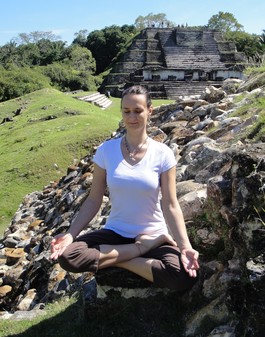 The body is believed to have many nadis, several thousand, in fact, that carry energy in the body.  There are three main ones, however, one on the right and one on the left, and one down the center – the Shushumna.  When the nadis are clear and the energy flows freely through them, we feel great, our consciousness functions at a higher level, we are in a state of health and peace.  When the Nadis are blocked, we are tired, listless, dull, ill, or simply unhappy.

The snake is a great visual to use, because what Kundalini represents is basically the toxins and the metabolic wastes in our gut that clog our system and impact the health of the body in negative ways.  It is the major block.  It cannot be avoided – if you eat, you will have waste.  Yoga has long been concerned with removing wastes from the body, as they are believed to be harmful – and it is hard to disagree.  When waste is not removed in a timely and efficient manner and if the toxins are allowed to accumulate, they begin to slowly poison the body not only on the physical, but also on energetic levels.  When we feel bogged down on the inside, our energy is also slow, sluggish, dull.

So, Kundalini is stored energy - that is pretty much agreed upon in various Yoga traditions.  What they disagree upon is what Kundalini is, as translations of ancient texts have been inaccurate and have led to this confusion.  Some believe the ancient texts say that Kundalini is actually a positive energy, a pure consciousness that needs to rise and enter the central channel, and to go all the way up to the crown chakra, to the crown of the head.  However, careful reexamination of the texts reveals that Kundalini is not the kind of luminous consciousness that you want rising, but rather the waste products that need to be eliminated in the other direction - down.  Kundalini should not be allowed to go upwards to the crown of the head, because who wants this waste matter hitting the fan, so to speak?

Here is the what needs to happen: the ancient Yogis describe a fire in the belly, in the region of the solar plexus, our Third Chakra.  This fire is fueled by our breath and practice – it is the heat you feel when you practice Yoga and Pranayama.  It fuels our digestion and metabolism.  Its flames are meant to burn up the toxins in the system to expel them.  When the fire in the belly, called Agni, reaches Kundalini the toxins (and since the flame is always pointing upwards, inversions have been long revered in the Yoga practice for this reason) - the fire is brought directly to Kundalini, who is all coiled up and is blocking the Shushumna.  The Mula Bandha is also pushing Kundalini up to the fire - she is then caught between the rock and the hard place, so to speak, or between Agni and Mula Bandha.  Snakes are afraid of fire.  Like a snake she goes straight as a stick and is expelled downward through the mula, clearing the way at the entrance to the central energy channel, the Shushumna Nadi.  Then Prana, or life force, can enter the central channel.

It is Prana that is meant to reach up to the crown of the head, Prana with its healing force is meant to bring illumination and wisdom.  When there are fewer toxins in the body and the body is free from disease, it is easier to achieve the state of Yoga.  This is what I learned from my esteemed teacher, in the Krishnamacharya tradition.