To Prop or Not to Prop?

On the subject of using props during Yoga class... Just thought it is time to spell out my philosophy on whether using props is appropriate, and if so, when. I am asked this often at the beginning of class - what props do we need? And more often than not, all I ask the students to get is a blanket, and maybe a block. I don't remember the last time I used a strap, or more than one blanket, or a chair, or anything else.

My general belief is that if you cannot get into a certain pose without propping yourself up, then it is not the pose for you. The general fuss of setting up props is a distraction from the focus I would like to maintain during the practice. There are rare instances when judicious use of a block to re-direct awareness to your inner thigh muscles and help you activate your core is helpful, but only as a temporary tool. Once the understanding and the required muscle action is achieved, I ask my students to re-create the same sensations, the same actions, without the block. I have used the wall for the same purpose lately, because our feet are often "dead zones" of our awareness, and placing a foot up on the wall in a balancing pose can be quite an awakening!

There are instances when a little extra padding is nice, but I never could understand the five blankets under the shoulders for shoulderstand, for example. I don't teach shoulderstand in a group class anyway for safety reasons - I believe that the risks outweigh the benefits for a general Western practitioner with compromised neck and shoulders. Besides, there are many other alternatives that would give the same if not more profound effect without the risk. 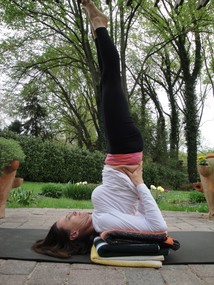 Moreover, five blankets under shoulders in shoulderstand puts MORE pressure on the neck! You can see it in the first picture, how my throat is all jammed up, how the neck is overstretched like a hammock. The circulation to our necks is poor due to bad posture as it is, and good neck alignment simply does not exist in the Western world.The neck ligaments are dry and when put under pressure this way can be easily damaged. Not to mention that it felt very dangerous just getting in and out of the pose! 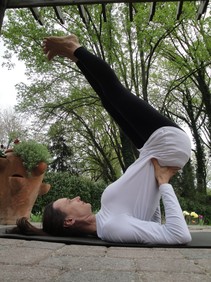 The neck should maintain its neutral curve, and the weight should be on the shoulders, not the neck, while in the pose.You can see in the second picture even the light shining through the space between my neck and the floor. That's the version I would offer to my more experienced students, where the body is not vertical to the floor, but rather at an angle. Neutral neck curve would allow lymph and blood flow to the brain, which is the point of the inversion, anyway. 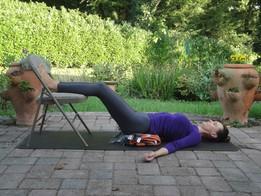 Again, if you cannot get into the pose on your own, then it is not the pose for you! My favorite substitution for shoulderstand is Viparita Karani, with legs up either the wall, or up on a chair, and the pelvis slightly elevated on a folded blanket (or not at all, depending on the student's preference). 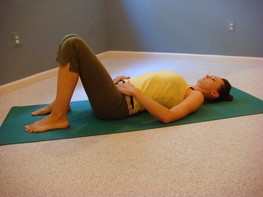 In group classes I try to avoid fussy set-ups and more often than not would simply direct the students into constructive rest pose, so that their attention is not scattered by the act of getting the blanket to fit just right under the pelvis, or getting their feet up on the wall/chair, or positioning their arms just so (below the heart level), etc, etc. But for a personal practice it is sometimes very nice to set it up ahead of time, so you simply transition to it when you are ready, with as little fuss as possible.

One prop that I have been frequently eliminating for at least part of the practice (and for myself - entirely) is the mat. Yes, that's right! No mat. For one thing, nowadays Yoga mats are these status symbols that are often too expensive. For another, ancient Yogis did not have a mat to practice on, and you know what? My practice has shifted onto a whole new level without the mat. It is like some kind of box was removed, and I was free from the lines on the floor. Creativity in practice went into overdrive (hello, Liberated Yoga!), and some poses, like Down Dog, for example, feel fresh and new again. Have you tried Down Dog without a mat? On hardwood floor? On the carpet? On the sand? On warm stone? 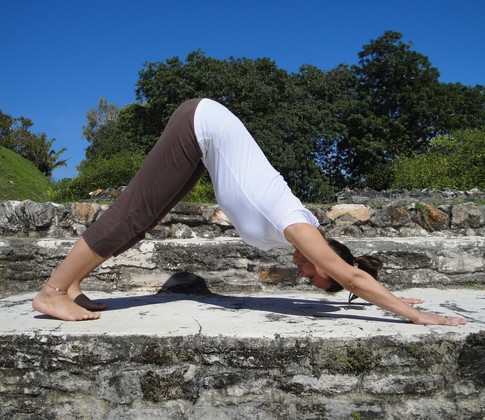