Take a Long Breath... OUT 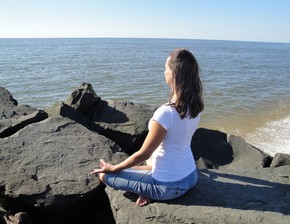 You probably have heard the age-old advise for stressful situations: "Take a big breath in!" However, if we examine the physiology of breathing, we will realize that actually we should do the opposite.

Understanding how our nervous system works will help us be more aware of how stress affects our breathing, and how, in turn, with breathing, we can affect the levels of stress.

Let's begin the with the basics. You probably know that the nervous system has two states - Sympathetic and Parasympathetic. Sympathetic is known as the "fight or flight" response, and is activated when the nervous systems perceives a threat. It involves higher heart rate to pump blood to muscles in case you need physical energy, our breath quickens and we tend to hold the breath after the inhale, to get as much oxygen into the blood as possible. Both inhale and exhale shorten, but especially the exhale.This creates two of the most common problems that people experience today with breathing - hyperventilation (so-called overbreathing) and mouth breathing. This habit of dysfunctional breathing tends to persist, sometimes for years, leading to a host of health problems, such as asthma, rhinitis, sleep apnea, and various metabolic disorders, because it affects digestion in a negative way (on that a bit later).

The cruel thing is that the nervous system doesn't really differentiate one stressor from another, and it will activate the sympathetic state whether our response to the threat requires physical action or not. Whether it is a deadline at work, an argument with a friend, bumper to bumper traffic, or a lion lunging at you, the response is the same.

This creates a vicious cycle - the nervous system becomes agitated, the stress response sends signals to the nervous system that we are worried about something, and reinforces it. Once this pattern becomes established, it tends to become chronic, and our body loses tolerance for carbon dioxide, because the body learns to rely on having an excess of oxygen to support metabolic requirements of stress response (without actually using all that oxygen).

A word about oxygen. Typically we have been taught that the more oxygen we have, the better, but that is not necessarily true. Our breath is regulated by brain receptors that monitor carbon dioxide levels in the blood, and the main purpose of breathing is to get rid of any excess. However, carbon dioxide is not just a waste gas - it is very important for certain vital functions in the body. One of the effects of hyperventilation is that too much carbon dioxide is exhaled, leading to an excess of bicarbonate ions and a deficiency in hydrogen ions, and that, in turn, shifts the pH of your blood towards alkaline.

Within as short of a period as 24 hours, your body becomes habituated to this slightly more alkaline state and loses its tolerance for carbon dioxide. We become unable to put up with higher concentrations of it in our blood, and end up stuck in this dysfunctional pattern. Carry it long enough, and the more alkaline state begins to affect your entire system, for example the bacteria in your gut, (through natural selection). Your metabolism becomes irregular, suppressed, inefficient, toxins are not eliminated in a timely manner, they escape through the intestinal wall into the viscera of the belly, and sensing that, your body begins to pack your gut with fat and water, to insulate itself from these toxins. That is why some very slim people, some who exercise regularly and "eat right" still have stubborn belly fat.

What are some of the signs of overbreathing? According to Patrick McKeown in his book The Oxygen Advantage: The Simple, Scientifically Proven Breathing Techniques for a Healthier, Slimmer, Faster, and Fitter You, when people have a habit of hyperventilating all the time, the breath is mostly confined to the chest area, with lots of visible movement there, during rest the breathing is noticeable and audible, it can be erratic, inter-spaced with deep sighs, yawns, and big inhales with breath retention after the inhale. You can see why instructing people to take deep breaths IN is exactly the wrong thing to say, as it would mean more of the same and why breathing into a paper bag for panic attacks works - you are inhaling the carbon dioxide back in.

Overbreathing, especially through open mouth during exercise, actually reduces the delivery of oxygen to the tissues and organs of the body, exactly the opposite of what you'd expect. It constricts your carotid arteries and reduces the amount of oxygen available to your brain by half. It makes us feel lightheaded. Especially when practicing mild forms of physical exertion, breathing through the nose is better than huffing and puffing, so back off on the intensity of your workout if you feel like pulling the air in through the mouth. I am not sure how this applies to true cardio, like running, since I don't know anyone who runs while breathing through the nose, so more contemplation is required in regards to that, however, it is possible that running and cardio are causing overbreathing and the problems that come with it while at the same time improving your cardiovascular health. These things are not mutually exclusive, and I know plenty of runners who report high levels of stress, have stubborn belly fat and digestive issues.

The Parasympathetic response is activated when there is no immediate danger, and you can "rest and digest" in peace. The heart rate slows down, the exhale slows down, carbon dioxide levels in the blood increase and balance out the oxygen, you feel relaxed and sleepy. The problem is that in our busy lives, there is so much stimulation going on, (and thoughts can be stressful too), that we become used to being in the Sympathetic mode and are unable to switch gears automatically. We have to "unlearn" the stress-induced rapid, shallow breathing pattern and re-habituate ourselves to the slow, subtle and smooth breath.

In Yoga we practice all poses and movements with this slow, steady breath called Ujjayi. It is performed with a constriction in the epiglottis so that the breath flows in and out even slower. Some poses in Yoga are, indeed, challenging, and therefore, can be interpreted by your nervous system as stress. However, if you do them with this slow, subtle, regulated breathing, you will remain calm and mentally relaxed even during the most frustrating and stressful Yoga poses. In a nutshell, it is a practice of stress-management, the skills of which can  become useful in your life off the mat after a while. 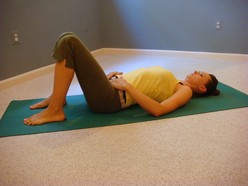 Incorporating a pause at the end of the exhalation during some not too challenging movements or Yoga poses will significantly deepen the effect. Towards the end of the session I always cue this technique to prepare my students for relaxation. Before Sivasana I instruct them to stay in constructive rest pose (knees bent, feet flat on the floor while lying on your back) and lengthen the exhale to a comfortable maximum, waiting for a natural suspension of breath at the end of the exhalation. It is a sign that your nervous system is shifting gears towards the Parasympathetic mode, and therefore during Sivasana (corpse pose) you can truly start to heal, digesting not only the food you eat, but also the experiences of your life, removing the toxins of negative thoughts and beliefs, because you are more relaxed, more centered, less reactive.

For a more detailed tutorial on Yogic Breathing, watch the video below, and we will talk about various breathing techniques that can be helpful in future posts.