Empathy through our eyes
By Anna Mikheeva 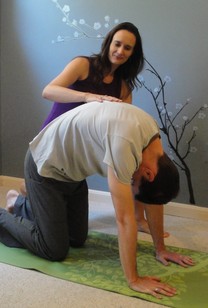 When I first came to a Yoga class and saw the Yoga teacher flow fluidly from pose to pose, I knew there was more to Yoga than just the poses.  She had the most serene presence about her.  She made me feel quiet inside by being quiet herself.  And now that I became a Yoga teacher, I realize that I also am being looked at by my own Yoga students, and I also hope to show them that there is more to Yoga than at first meets the eye.

Neuroscience in the past ten years or so has stumbled upon something very interesting that speaks to our ability to pick up on visual cues, to translate them into our own body, into our own experience.  It seems that the power of a good demonstration can go way beyond the gross, but into the subtlest of domains – our higher chakras, specifically the 6th, Ajna, our vision chakra.  This chakra governs enlightenment and higher wisdom.  We as Yoga teachers should be aware of our own power to send a message to our students, and use that power with our full awareness and responsibility.

“Recent findings are rapidly expanding researchers' understanding of a new class of brain cells -- mirror neurons -- which are active both when people perform an action and when they watch it being performed.  Some scientists speculate that a mirror system in people forms the basis for social behavior, for our ability to imitate, acquire language, and show empathy and understanding.  It also may have played a role in the evolution of speech.  Mirror neurons were so named because, by firing both when an animal acts and when it simply watches the same action, they were thought to "mirror" movement, as though the observer itself were acting.” [1]

This is a fascinating proposition, and a Yoga teacher can take full advantage of what we have noticed in our own classrooms – how well the students are able to transfer the verbal and visual cues to their own body, and what that may indicate about their Ajna chakra.  It is wonderful to see students becoming better and better at translating visual and verbal cues into their own movement or mental focus.  Eventually there comes a point where the need to look subsides to almost none, and the student is able to follow along with their eyes closed most of the time.

“At the annual meeting of the American Association for the Advancement of Science… researchers said that because mirror neurons fire both when we see someone move as when we move ourselves, they make equivalent "what others do and feel and what we do and feel." We do not just see an action; we also experience what it feels like to someone else.”[2]  Here the door opens to the possibility that simply by showing, by watching them do it, we as a group, can create a common experience that on the energetic level translates to the state of Yoga, the state of oneness.

It is a powerful subliminal message that I think would be made even more so if the Yoga teacher himself realizes what is happening.  Sometimes when I am teaching Yoga, I find myself dropping into a mental state of total concentration on the student (usually when I notice something odd or a misalignment that I can help correct) – I can feel the difficulty that they are experiencing.  By getting down beside them, I would do the movement or the pose with the specific mental focus on that person.  I try to create an energetic imprint for us both to share, side by side, and it really helps the person – they begin to “get it.”  I have had students come up to me and say that when I came over and showed it “just for them,” they had their own “aha” moment.  Showing and watching can be a great tool for a Yoga teacher that goes beyond words and pictures straight to the energetic level of their higher consciousness, the Ajna chakra.

“Mirror neurons "re-create the experience of others within ourselves," as UCLA's Mark Thompson put it in his AAAS remarks. They "allow us to put ourselves in the shoes of another." That makes them the neural basis of empathy.”[3]

"To function well with other people, we need to understand where they're coming from so as not to misread their intentions," says Regina Pally, a psychotherapist in and a clinical professor at UCLA. "Mirror neurons are what let us understand others' emotions." In fact, mirror neurons in people are connected to the brain's emotion region, the limbic system: When your mirror neurons fire in a reflection of someone else's, it triggers empathic emotions.”[4]

And herein lies the danger: “Mirror neurons also let us feel another person's pain. The same cortical neurons that process the sense of touch also fire when you see someone else touched. And a region that registers disgust that you feel directly also fires when you see expressions of disgust on others (hence the visceral wallop of "Fear Factor").  Instead of merely seeing what other people do and feel, said Christian Keysers of the of , the , "we start to feel their actions and sensations in our own cortex as if we would be doing these actions and having those sensations."[5]

Therefore Yoga teachers must take their own emotional, energetic, and physical health very seriously.  Just as we can transfer the feeling of Yoga, serenity and flow, we can transfer our own pain, disgust, fear and whatever else we may be carrying with us.  It is important for the Yoga teacher to do their own work to transcend the lower chakras and have a clear path of energy, expressed in a good posture and calm, clear voice, as well as compassionate gaze.

[1] Society of Neuroscience, www.SFN.org, News Releases, Nov 4, 2007, “MIRROR, MIRROR IN THE BRAIN: DECODING PATTERNS REFLECTING UNDERSTANDING OF SELF, OTHERS MAY FURTHER AUTISM THERAPIES”